The Winner Takes It All: The winners of the SO!APART-Awards 2015 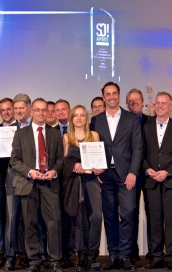 At this year´s SO!APART award ceremony there were several winners, the best Serviced Apartments were nominated in altogether six different categories.

Houses from very small to very big competed against each other in four jury categories. Besides location and infrastructure also the layout of the rooms, the ambience and the design of the apartment houses were evaluated by jury of six. But also aspects like services for the guests or the quality of the equipment and facilities influenced the final result. For the first time, this year the applicants were able to collect bonus points by submitting a voluntary exercise. Here, radio spots, a video, a photo book and even a self-made board game were handed in – the creativity knew no boundaries.

Five houses were nominated in the category ‘small and precious’ which had to convince with a maximum of 50 apartments and personal commitment. THE RED from Dusseldorf won the sought-after award with its sensational location and the standard of a five star hotel for the second time in a row. The building was erected in neo-renaissance style in 1901 and completely restored 2010-2013.

New to the market since early summer and already on the winner´s rostrum: Frederics Serviced Apartments STYLE Oranienburger Strasse in Berlin. The house won in the category ‘new and different‘. Here, all houses which opened up in 2014 or 2015 had a chance to win the first prize. Frederics offers its guests a high level of comfort and security as well as absolute flexibility and privacy.

The iPartment Frankfurt City with its 73 apartments was able to win over the jury with aesthetic-functional design and high quality standards. Also the central location in the Europaviertel in Frankfurt/Main enthralled the committee in the category ’grand and great’. A prerequisite for the application was a minimum number of 50 apartments in combination with comfort and a feel-good atmosphere.

And not only the conference of the SO!APART became international this year. Houses from Budapest, Paris, Vienna and other cities were nominated in the category ‘international‘, but the fourth award was handed over to VISIONAPARTMENTS Zurich.

We cordially congratulate all winners of the SO!APART-Awards 2015!