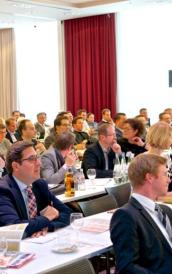 The résumé of the SO!APART 2015 is positive throughout. On 19th and 20th November 2015 it was once again time to raise the curtain for the third SO!APART 2015. This time even bigger and also international.

This year it did not take place in the Hanseatic city of Hamburg but in the capital city of Berlin. In addition to concentrated information and top speakers there was an accompanying exhibition where innovative products and services for the segment were presented. Not only for industry experts but also for those interested in the industry as well as for operators and investors the exhibition was an absolute added value. During the two-day conference which was held in the Best Western Premier Hotel MOA in Berlin also international guests got the chance to exchange information and learn, thanks to simultaneous translation facilities. Especially one thing became clear: “The future is bright”, as Alejandro García-Andrade of Luxury Hotels Group UK, puts it. And Anett Gregorius predicts a growth of the segment of 20 % in the next two years.

During the various papers there were some very interesting findings which will stay put in the minds of the attendees. Erik Siekmann, CEO of DIGITAL FORWARDS, drew the attention on the topic of digitalisation. However, he emphasised ”people first – tech follows”.Martin Schmitz, CEO of Schmitz Marketing also put the focus on the ever-increasing importance of members of staff. “It´s all about the heart, not the head.“ Because passionate employees, who “not only work in but for a company” are sought-after more than ever before. Jörg Neumann summed up the topic with his talk about customer amazement: “The most important day is the everyday life.“. In addition, the importance of mixed use concepts is increasing, e.g. accommodation models for students and business travelers in one building. Specific projects were introduced by Headquarter and I-Live. Since August 2014 STR Global tracks and supplies statistical data for the serviced apartment industry. Speaker Dennis Spitra illustrated that the average occupancy in Berlin and Hamburg is above 80 %. Interesting is the fact, that a growing differentiation with regard to facilities, services and pricing can be ascertained.

Kai Böcking moderated the forum this year once again very competently. During discussions and the World Café which has been introduced to the SO!APART for the first time, Kai was supported by Anett Gregorius and Sylvie Konzack (Chief Editor first class). Particularly the questions around the ‘Apartment of the future’ where operators and investors brainstormed separately, was met with immense interest. Another central topic that had also been intensely discussed was an online booking feature.

The award ceremony in the atrium of the Hotel MOA Berlin clearly marked the highlight of the SO!APART. The winners of altogether six categories (four jury and two audience awards) were: THE RED from Dusseldorf in the category “small and precious” and iPartment Frankfurt City in the category “grand and great.” Frederics Serviced Apartments STYLE Oranienburger Strasse from Berlin which only opened in early summer already won the price in the category “new and different”. The award in the category “international” can from now on be admired in Switzerland as it went to VISIONAPARTMENTS’ flagship house in Zurich. The audience awards went to SCHOENHOUSE STUDIOS and SCHOENHOUSE APARTMENTS. A great after-show-party with DJ Funky Henning rounded off the two-day event.

The consistently positive feedback during and after the event gets us already excited for the anniversary year 2016 when it will be time again: TO BE A PART.