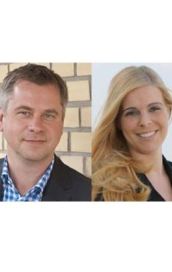 The travel agent and graduate in Business Administration (FH) worked for a system developer in Heilbronn to create specific enterprise applications and websites. To SAP SE, where he is now working as a travel manager for Germany, he came through a casual contact. At SAP SE, Dirk Gerdom has been responsible for all activities that are related to the global travel volume for 14 years. In 2014 he was appointed Vice President of Global Mobility. In addition, Dirk Gerdom has been the President of the VDR since 2009 and with his broad task areas provides an important part of the jury of the SO!APART 2015.

She is a studied journalist and communications expert and worked as a freelance copywriter for various PR and advertising agencies for several years. Ms Galas is an experienced magazine editor who has held senior positions in various fields and has been the chief editor of Business Traveller since 2013. With years of experience in the business area, she is the right person for the jury of the SO!APART- Awards 2015.

After completing his degree in Business Administration, he began his career at an IT service provider, where he took early responsibility in several business areas. After leading positions in various national and international companies, he founded the Certified GmbH & Co. KG, which is responsible for operational supervision of hotel certification, together with Kurt Schüller. This certification was summarised by Boardinghouse Consulting and the TÜV Rheinland in a catalogue of test criteria, modified and introduced last year with the certificate “Certified Serviced Apartment”. Till Runte is an all-rounder with a lot of professional backgrounds and because of this just the right person for the jury of the SO!APART-Awards 2015.

The trained travel agent has been working as a Travel Consultant & Sales Key Account Manager for major companies in the travel management industry. Her current position at Capgemini as Regional Travel Manager for Northern and Central Europe she has successfully held for four years now. She also coordinates the travel management for Germany and a further eleven European countries. With her international experience and the complexity of the tasks, Anja Nielitz plays an important role in the jury.

Oliver Graue studied journalism in the Bavarian capital and then worked at the Bavarian Radio and afterwards went to Hamburg to Axel Springer. Finally, he moved to Hamburg FVW Mediengruppe, where he has been the chief editor of the business magazine BizTravel since 2006. Oliver Graue is the expert on topics such as business and travel management. With his years of experience in these areas he is an important pillar for the jury.

We want to thank all members of the jury and are excited about this year’s winners of the SO!APART -Awards 2015. Thank you also to all participating apartment houses.